Homer A. Plessy Day was established June 7, 2005, by the Crescent City Peace Alliance, former Louisiana Gov. Kathleen Blanco, the Louisiana House of Representatives, and the New Orleans City Council. On this special day, we remember Plessy, a shoemaker who was arrested on June 7, 1892, at the corner of Press and Royal streets in New Orleans. He was charged with violating the (1890) Separate Car Act of Louisiana, which mandated separate accommodations for Black and White railroad passengers. – Plessy & Ferguson Foundation

Look for more in the coming months as RPA has partnered with the Plessy & Ferguson Foundation to help rebuild, restore, and renew relationships. 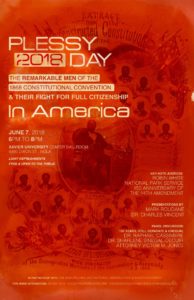